AN INTERACTIVE PERFORMANCE ON DIVERSITY

Throughout 2012, I collaborated with students from Northwestern's Muslim Cultural Students Association (McSA) and the School of Theatre to create A THOUSAND WORDS, an ineractive performance event exploring the University's depiction of its diversity. The event asked students to consider the ethics of how Northwestern represented its ethnic, religious, cultural and gender diversity through its photographs. Our actor-facilitators led the audience in dicussions on stereotyping, income disparity, and representation. The afternoon culminated in students choosing seven photos from a stack of 50 that they best felt represented the university's actual demographics, yet also promoted an inclusive environment.

A Collaboration between the Northwestern School of Theatre, Muslim Cultural Students Association, and Inspire Media.

Read more about the event here. 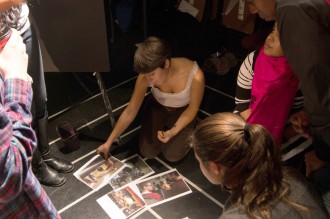 How to Find Me